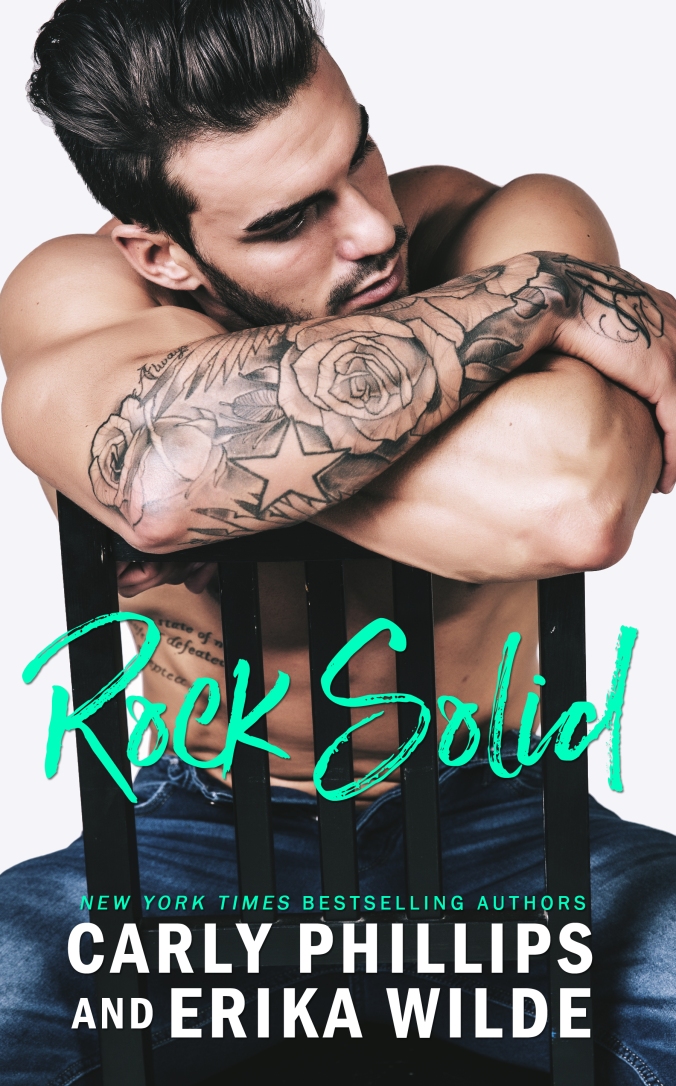 Connor Prescott doesn’t do one night stands (yes, ladies, he’s an anomaly) so when he meets a beautiful woman during a snowed in night at the airport who wants to forget her heartache, he makes an exception. Their night together is incendiary, and by morning Connor wants more . . . except his sexy stranger is gone. He’s pretty sure he’ll never see her again, until three and a half years later she finds him, and changes his entire world with three little words . . . You’re a daddy.

Connor and Katie are stranded in Denver due to a snow storm and can’t get back home to Chicago.   Both feel a strong connection to each other.  Katie just discovered that her boyfriend was cheating on her (on Valentine’s Day!).  Neither Connor nor Katie do one night stands, but the attraction and circumstances are too strong to ignore.  Katie leaves early with no note and no contact information.  Exactly how she wanted.  Except that she will always remember that one night, and so will Connor.  The story then jumps to 3 1/2 years later.  Katie finally finds Connor and decides to tell him that he’s a father.  Not only does Connor get to know his daughter, but he’s getting to know Katie again as well.

This is such a good surprise pregnancy book.  Katie willingly tells Connor about Val and Connor is excited about the idea of being a father.  They are learning and working together on this transition and introduction into Val’s life.  Letting Connor in to Val’s life is easy, but Katie is reluctant to let him back into hers.  Katie has issues from her past and doesn’t believe that anyone will stay in her life.  Connor proves himself to her time after time.  Katie just has to look at what’s in front of her.  This is such a good story.  And there isn’t many things that are sexier and swoon-worthy than a father with his little girl.  Connor’s and Val’s relationship is priceless.  It’s a small part but it adds so much to the book.  If you like a good surprise book then definitely check this one out.

Connor scrolled through the list of movies on pay-per-view for the tenth time, not sure what Katie might be in the mood for. He’d raided the mini bar as promised, and all the junk food loot was on the coffee table awaiting their impromptu slumber party. He was just waiting, albeit impatiently, to find out if Katie was going to join him or not. After her emotionally draining day, he wasn’t sure she was going to be up to hanging out, and as much as he’d understand that decision, the thought mostly disappointed him.

When he heard the door to her bedroom open, a flood of relief coursed through him. “So, what are you in the mood for?” he asked, anxious for her to join him and hoping that she sat on the same sofa as he did instead of the single chair opposite the couch—Jesus, what was he, fourteen? “We’ve got our choice between a romantic comedy, action adventure, or a horror flick.”

“None of those,” she said, her voice soft and husky as she approached from his peripheral vision. “The only thing I’m in the mood for is . . . you.”

He managed to close his mouth, but that only made his jaw clench achingly tight as he fought off the urge to do something stupid, like push her down to the couch and give free rein to the attraction they’d both been skirting. Jesus, he couldn’t tear his eyes away from her and the see-through lingerie that exposed more than it covered, teasing him mercilessly. The sheer underwire cups pushed her generous breasts up like an offering, barely containing all that mouthwatering fullness, and her tight, rosy nipples pushed against the thin, lacy fabric. The skirt of the short gown draped over her midsection like a veil, sheer enough for him to see the indentation of her waist and flare of her hips, and a pair of tiny red matching panties he wanted to tear off of her with his teeth.

He swore beneath his breath, and when she made a soft, uncertain noise in the back of her throat, he jerked his gaze back up to hers. He caught a quick glimpse of apprehension shimmering in those big brown eyes, which contradicted the bold, brazen woman currently standing in front of him.

“Maybe this was a really stupid idea,” she said in a voice that cracked with a wealth of doubts, right before she turned back around and rushed toward her bedroom in a blur of red material that swirled around her waist and thighs.

Realizing that she believed his hesitation was because he didn’t want her, Connor jumped to his feet and reached Katie before she made it halfway across the living room. He caught her around the waist with a strong arm and hauled her up against his body, her back to his front—and quickly realized what a huge mistake that was.

She valiantly struggled to break free of his hold, the curve of her delectable ass shifting and wriggling against the thick length of his cock already straining the zipper of his jeans. He gritted his teeth at the onslaught of lust racing through his blood, threatening to eradicate his self-control and any rational decisions he needed to make. And the situation definitely called for him to remain level-headed so he could think with his brain and not his unruly dick.

She tried to push away his arm one last time, but when it didn’t budge, she made a frustrated sound. “Just let me go, Connor,” she said, her voice defeated and so damn vulnerable. “Please.”

He wasn’t releasing her until he knew she was okay. “Katie—”

“Don’t make this any worse than it already is,” she said, cutting him off, her entire body still unyielding against his. “I must have misread your interest, and I don’t think I can handle getting rejected twice in one day.”

Aww, fuck. The very last thing he felt for her was disinterest, but he didn’t want to take advantage of her or the situation, either. He released her and turned Katie so that she was facing him, hating the wariness in her gaze. She looked like she was going to bolt again, and he wasn’t about to let that happen until they got a few things straight. With his hands gripping her hips so she couldn’t go anywhere, at least not easily, he backed her up a few steps, until she was trapped between him and the wall.

The impulse to run his hands up the indentation of her waist to the breasts nearly spilling out of her flimsy top was so strong and so distracting he had to place his palms safely on the wall on either side of her shoulders. She tipped her head back to look up at him, and he nearly smiled when he saw the earlier doubts that had been clouding her gaze were now replaced with a stubborn attitude that turned him on way too much.

“First of all, you didn’t misread anything,” he told her. “You surprised the fuck out of me, because I didn’t expect you to come out of your room looking like a goddamn sex kitten. And secondly, I’m not rejecting you personally.”

The corner of his mouth quirked at the impudent tone of her voice, and before he could think better of it, he touched one of the soft, blonde strands of hair that fell to the swell of her breasts. He rubbed the silky texture between his fingers, immediately imagining how it would feel to have his entire hand wrapped around the length. Tugging. Pulling. Her gasping. Moaning. Begging.

The heady images in his head fueled his growing hunger for her. “What, exactly, are you offering, Valentine?” he murmured, knowing he was torturing himself but beyond caring any longer.

She rolled her eyes at him. “Isn’t it obvious?”

He watched as her tongue dampened her bottom lip, spurring more dirty thoughts to fill his head. “Tell me,” he said, the words a gentle demand. “Just so it’s clear for both of us.”

She hesitated for a moment, as if gathering up the nerve, then spoke. “Remember that fantasy I told you about earlier? The sex-with-a-stranger-in-a-hotel-room fantasy?”

She exhaled a breath. “That’s all I want. No last names. No personal information. Just a night of hot, mindless sex.”

Yeah, that sounded damn good, except he was already coming to want so much more than that with her. 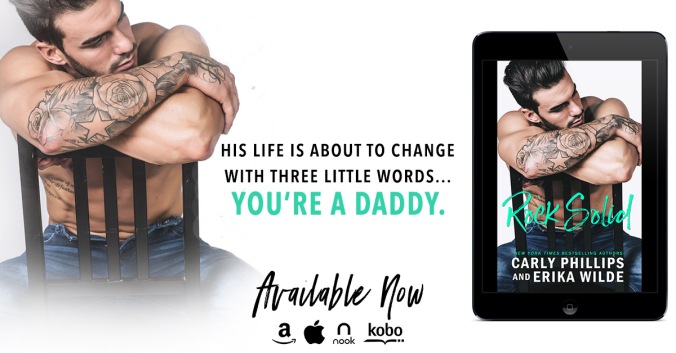 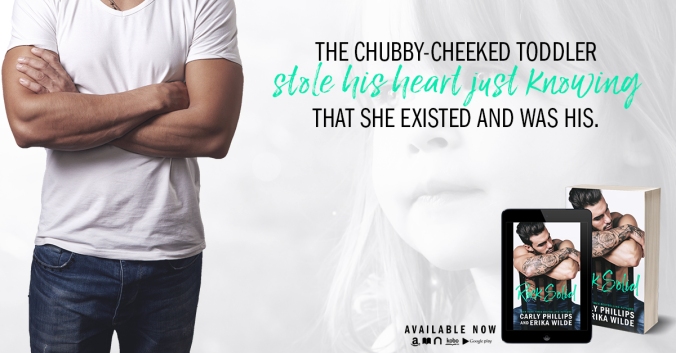 Carly Phillips is the N.Y. Times and USA Today Bestselling Author of over 50 sexy contemporary romance novels, including the Indie published, Dare to Love Series. She is happily married to her college sweetheart, the mother of two nearly adult daughters and three crazy dogs. Carly loves social media and is always around to interact with her readers.

Erika Wilde (aka Janelle Denison) is the USA Today bestselling author of over 50 contemporary romances for multiple print publishers.

FLIRT from USA Today and Amazon Charts Bestselling author @authoradrianalocke is NOW AVAILABLE!!⁠
Nightingale: An Anthology for Ukraine, a romance collection of swoon-worthy, never-before-seen short stories from over fifty of your favorite bestselling authors is available now!⁠
USA Today Bestselling author Adriana Locke delivers a “fresh and fun!” romance between a grumpy single dad and his beautiful, spunky employee—the one he can’t have.. Sweet by Adriana Locke is LIVE on Amazon and in Kindle Unlimited! Grab here: https://geni.us/SweetLocke⁠
NOW LIVE! The Last Eligible Billionaire by Pippa Grant is available now + FREE in Kindle Unlimited!⁠