Title: About Time
Series: The Avenue #1
Author: B. Cranford
Genre: Contemporary Romance
Release Date: April 25, 2018
Blurb
It’s all about timing . . .
Ten years. That’s how long Ashton Andrews spent wondering if she would ever have the family she craved, with a man who was apparently not the one.
Six weeks. Time spent patiently waiting, silently hoping and endlessly wondering if the decision she’d made to go it alone was the right one.
Nine months. Morning sickness, cravings and that constant need to pee are what Ashton has to look forward to, knowing that numbered are her days of being just one.
Fifteen years, eight days. An eternity ago were those unforgettable moments spent crushing on her brother’s best friend, yet her mind constantly turns to him—the one who
got away.
The one who might yet be her one.
It’s probably about time she found out . . .
About Time is a contemporary romance featuring 30-something characters who know that life is short and know what they want.
Review

About Time is the first in a new series for B. Cranford.  B. Cranford is quickly becoming one of the very few authors that I will read anything she writes.  So of course, I jumped on the chance to read this one.  As with all of her books, B. Cranford gives such a refreshing take on standard tropes.  At the core, this is a second chance romance with a pregnancy thrown in.  Now, if you’ve read any of my other reviews you’ll know that I’m not a huge fan of pregnancies in books.  (There’s no reason for it…just a weird quirk of mine).  But this one was such a different spin on introducing a pregnancy into a book that it added to the story rather than distract.  This book tells the story of how life can take many turns and encounter many obstacles but will lead us to where we need to be.

The characters are real and flawed as well as sexy and sweet.  Some of the challenges that the characters face (both primary and secondary) are real challenges that happen in our world today.  They aren’t contrived or forced.  To me this just makes the story even better.  I know I’m repeating myself, but this book and this author is so different and so refreshing, especially in a genre when sometimes it feels like you see the same story over and over.  You definitely won’t get the “same old” story here.

I love how Ashton took charge of her own life and made decisions she thought was right for her.  I’m envious of the love and support Ashton and her brothers have for each other.  This is an example of how siblings should be.  Duncan also has a strong sense of family.  He is protective and loyal.  He is also very swoon-worthy.  There is so much more I can say about these two characters, but I think they need to be experienced instead of recapped.  Just know that ALL of the characters in this book are worth getting to know.  I can’t wait for future stories!  If you are looking for a story that is a little different and very captivating, then definitely read this book. 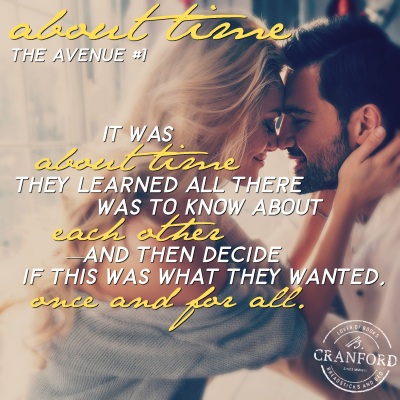 B. Cranford is a proud Australian living in the USA, a lover of books, breadsticks and bed, and the mother of two children who are far too similar to their father for her liking. A lifelong reader, she dove into the romance genre on the recommendation of her best friend and hasn’t looked back since. Her debut novel, The Brightest Star, a second chance romance with (she hopes) heart and humor was released on July 13, 2017, which just so happened to be her birthday. Because if you release a book on your birthday, you get twice as much cake, and that can only be a good thing.
Author Links