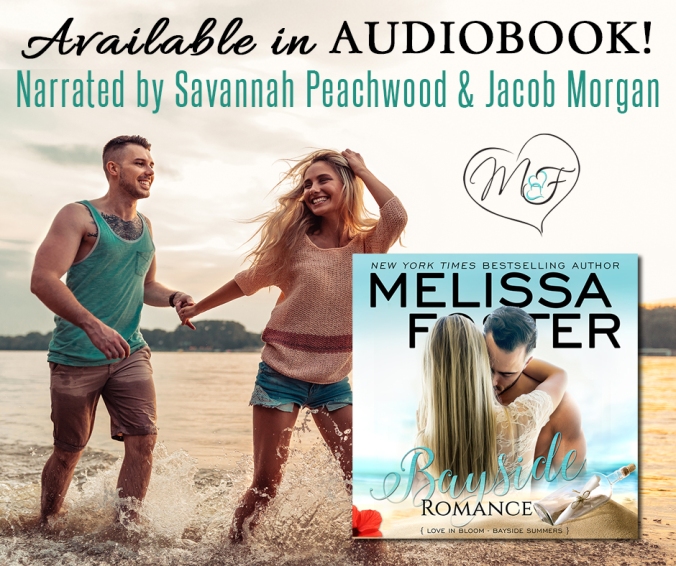 Gavin is about to find out that Harper really does exist⁠—and she’s going to knock his socks off! Find out for yourself in Bayside Romance!

When screenwriter Harper Garner got a shot at the big-time in LA, she celebrated her brave cross-country move with her first and only one-night stand—connecting so deeply with the sexy, brilliant man, she broke the number-one rule of one-night stands and left her phone number. Not hearing from him was only the first in a long line of hope-shattering, confidence-busting blows. Ten months later, Harper is done with men and done with LA. She pulls up her big-girl panties and heads home to Cape Cod to start over.

On the surface, interior designer Gavin Wheeler has it all: a successful business, a loving family, and a close-knit group of friends. But Gavin once endured a heartbreak so painful, he was sure he’d never feel anything for a woman again. A chance encounter at a music festival with a gorgeous, down-to-earth blonde proved him wrong, but when morning came, the woman who made him crave more was gone.

A serendipitous evening reunites Harper with her devastatingly delicious one-night stand, and the connection is just as intense as she remembered. Harper’s life is too unsettled for a relationship, but Gavin is determined to help her find her way, especially if it leads straight to his heart. Moonlight conversations lead to steamy kisses, and as romance blooms, it stirs a love too real to deny. But when Gavin’s past collides with the life they’re building, it has the power to ruin everything.

This is the fifth book in the series, but don’t that that deter you if you haven’t read or listened to the others.  It is a complete standalone.  Each book is a different couple with some interconnected characters.   Just like the rest of the books in this series, it is a light, easy, fun book.  I typically read Melissa Foster’s books so it was a nice change of pace listening to the audio book instead.  The audio is very well done, and the narrators are great.  The story is a second chance romance with a lot of serendipity thrown in.  Gavin is very swoony.  There are so many good qualities to list about him.  He is sexy, smart, successful, sweet, thoughtful, and so much more.  He is definitely book boyfriend worthy.  I had a difficult time connecting with Harper.  At times she seemed very immature and overly dramatic about events that happened in her life.  She was a likeable character, but there were many eyerolls while listening.  Throughout all of it Gavin was still patient with her.  He really made the book worth it to me.  If you like this author then I’m sure you’ll like this book.

Author @katecanterbary has revealed the cover and blurb for In a Jam!⁠
FLIRT from USA Today and Amazon Charts Bestselling author @authoradrianalocke is NOW AVAILABLE!!⁠
Nightingale: An Anthology for Ukraine, a romance collection of swoon-worthy, never-before-seen short stories from over fifty of your favorite bestselling authors is available now!⁠
USA Today Bestselling author Adriana Locke delivers a “fresh and fun!” romance between a grumpy single dad and his beautiful, spunky employee—the one he can’t have.. Sweet by Adriana Locke is LIVE on Amazon and in Kindle Unlimited! Grab here: https://geni.us/SweetLocke⁠