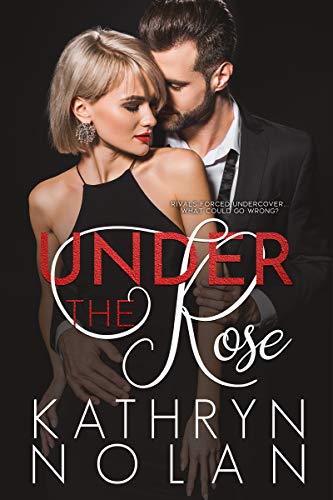 Under the Rose by Kathryn Nolan

She’s about to go undercover with her arch-nemesis…

From the outside, the gorgeous Freya Evandale seems like a quirky bookworm with a taco addiction. Most people would never guess she’s a proud drop-out of the FBI’s training academy and a highly-skilled computer nerd. These days, she’s happy as a private detective at Codex, specializing in stolen rare books.

That is until an old nemesis with an arrogant smirk and superhero shoulders ends up in her office.

Special Agent Sam Byrne is a tightly-wound workaholic with a secret…or ten. When a betrayal leaves him questioning his career with the Bureau, consulting for Codex seems like the perfect place to hide. But he certainly never expected to see Freya again. At the academy, their rivalry was legendary. And their sparring sessions resembled an actual battle, or worse… foreplay.

Now these enemies are forced to play nice as they go undercover to infiltrate a secret society. It’s a dangerous world of power, wealth, and shifting alliances. The higher the stakes, the harder it is to resist the true reason behind their rivalry. But surrendering to years of pent-up lust is a direct threat to their mission…and their safety.

Author’s Note: If smoldering enemies-to-lovers, volcanic repressed lust, secret tunnels, gun-toting bad guys, and delicious slow burns are your jam, Under the Rose is for you!

Wow! The talent of Kathryn Nolan never ceases to amaze me. This book is a perfect combination of suspense and romance. You will want to know what happens next as much as you will be enthralled as the chemistry between Freya and Sam. Not only will you be captivated by the intrigue, suspense, and steaminess of the story, it is just beautifully written. There were times I had to stop to just appreciate the beauty of the words and the sentiment.

This is technically an enemies to lovers book, but it’s really so much more. The chemistry and the push-and-pull between these characters just leaps off the page. You will want to hug, shake, and yell at these characters equally. There is so much passion and tension that I could not put it down. In the midst of all that there is also a sweetness and vulnerability that hovers in the background and then hits you with all the feels. You will be left breathless (for multiple reasons), swooning, and filled with emotions.

This is the second book in the series but can be read as a standalone. Even though it can be read alone, this author weaves a world that you won’t be able to get enough of. I want to know everything about Codex and these eclectic characters that are in this underworld.

I wish my review could adequately convey how much I love this author and this book. You need this book, and you need everything this author has ever written in your life. Trust me…you’ll thank me later.

Kathryn is a book-loving, coffee-drinking outdoorsy girl. She loves to spend her free time hiking, camping, and traveling in her camper van (“Van Morrison”). Her husband is a cute, bearded nerd. Their rescue pup – Walter – is (probably) half-coyote but is 100% The Best Boy. Kathryn just moved back to Philly – her hometown – after living with her husband in Northern California for eight years. In 2017, they spent six months traveling across the country in an epic road-trip…which they’re already planning on doing again.

Keep in touch with Kathryn (and receive a lot of pictures of Walter) by subscribing to her newsletter here: https://www.authorkathrynnolan.com/join-my-newsletter.