Title: A Little Bit Crazy
Author: B. Cranford
Genre: Contemporary Romance
Release Date: November 2, 2017
Blurb
The biggest mistake Jade Miller ever made was agreeing to
a date with the World’s Biggest Jackass…Stood up, fuming and, frankly, done with men, Jade’s not about to forgive or
forget.Except, with the voices in her head giving her conflicting ideas, and the man
himself showing his smart, sexy, swoony side, she’s having a hard time staying
away.The stupidest thing Declan Young ever did was forget to make that phone
call…

“Hey, I’m running a little late” could have saved him a year of
frustration–sexual and otherwise–at the hands of a certain pink-haired
spitfire.

All he wants is another chance, another night–the possibility of making it
right. Which he’s determined to get.

The craziest thing is they’re crazy about each other…

Jade would rather believe that they’re enemies.

And that makes them both feel a little bit crazy…

My Review
If you are looking for chemistry, sexual tension and some angst, then this is definitely the book for you.  Now don’t get me wrong.  I LOVE reading about a kick-ass, confident, strong female.  but I also love reading about the ones who struggle with self doubt.  It makes me feel like there are others out there like me.  That’s what this book gives you.
Jade seems confident on the outside, but she struggles with anxiety and self doubt.  Her self monologue gets the best of her sometimes.  Jade learns that by having loyal friends and people that love her she can learn to quieten those voices.
Declan is definitely in my top 10 of book boyfriends.  He’s an alpha male with a sweet and loyal side.  He won’t give up on Jade.  He loves, accepts and protects her in such a beautiful and heartwarming way.
For me there were lots of feels in this book.  Many things hit close to home.  Makes me think that maybe we all just a little bit crazy.  And in finding those that love and accept our crazy is the way to happiness. 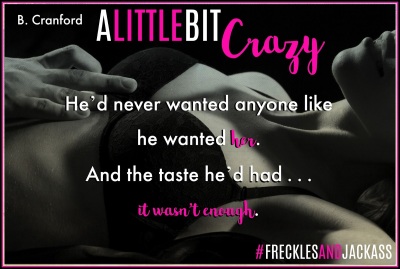 B. Cranford is a proud Australian living in the USA, a lover of books, breadsticks and bed, and the mother of two children who are far too similar to their father for her liking. A lifelong reader, she dove into the romance genre on the recommendation of her best friend and hasn’t looked back since. After three years as a blogger, she decided it was high time she finally finished one of the 12,002 books she’d started writing, and the end result was The Brightest Star. 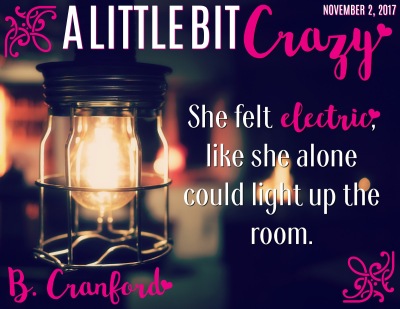 Things heat up (and take an unexpected turn) when a trainer takes on the local pizza parlor owner. He wants to show her that exercising can be fun. She just wants to exercise with him.⁠
I preordered mine so fast my PayPal is still smoking! I can’t wait!
🏄‍♀️ Out of the Blue by Kathryn Nolan is LIVE! 🏄‍♀️⁠
Off the Record: A With Me in Seattle Mafia Novel by Kristen Proby is now live!⁠
★★★ SERIES COMPLETE ★★★ ⁠
★★★ SERIES COMPLETE ★★★